Nepal is having huge power crises recently. Even the capital city, Kathmandu, is facing more than 12 hrs black out in a single day and the government officials have warned that this will increase up to 16-20 hrs after couple of months. Power outage has large impact on people's life, economic activity. education and literally and practically everywhere. Many industries have gone shutdown because of no-power. In response to energy crises, government declared energy crises (emergency) and has decided to make new diesel power plants to produce thermal electricity. And some other ways of solving the problem in short term and long term basis are coming for discussion. One of the alternatives to power plants is to replacing traditional incandescent lamps (IL) by compact fluorescent lamps (CFL). In this post I will try to explain CFL, how it is better than IL in terms of power consumption and pollution.
Three months ago, I replaced 3 IL bulbs in my apartment with CFL and my propose was to save power and ultimately save power bill (money :) ), although CFLs are more expensive than ILs. 60 W traditional IL bulb.s were replaced with 13 W CFLs without compromising light. I have not done calculation how much money I am saving out of it, but I am pretty sure that these CFLs are saving some amount. Now this is more relevant to Nepal's present power crises.
Compared to general service IL giving the same amount of visible light, CFLs use less power and have a longer rated life. The average rated life of a CFL is between 8 and 15 times that of ILs. 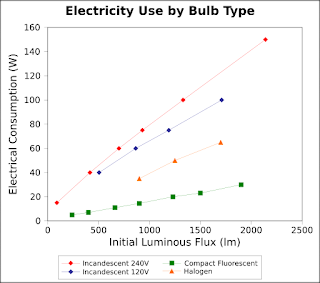 The chart shows the energy usage for different types of light bulbs operating at different light outputs. Points lower on the graph correspond to lower energy use.


A typical CFL is in the range of 17 to 21% efficient at converting electric power to radiant power.
While the purchase price of an integrated CFL is typically 3 to 10 times greater than that of an equivalent IL, the extended lifetime and lower energy use will compensate for the higher initial cost. According to a report - A household that invested $90 in changing 30 fixtures to CFLs would save $440 to $1,500 over the five-year life of the bulbs.


Since fluorescent lamps use less power to supply the same amount of light as an incandescent lamp, they decrease energy consumption and the environmental effects of electric power generation. Where electricity is largely produced from burning fossil fuels, the savings reduces emission of greenhouse gases and other pollutants.
Lesson from Cuba: In Cuba, all ILs are exchanged to CFLs in 2007 in an effort to make the country energy efficient and self sustained and banned import and sales of incandescent light bulbs. Cubans are helping their way of power saving methodology in other countries. A small island communist country used to have 16 hrs black out in a day back in 2004. This finally forced the government to find alternative ways to reduce power use. Along with other energy efficient methodologies (solar, wind, bio-fuel, energy efficient buildings etc), the Cuban government started to replace all ILs by CFLs. And this is the first country to do this-energy revolution.
Many other developed and developing countries are now taking similar measures to reduce power use and green house emission by replacing ILs by CFLs.

Nepal can learn great lesson from Cuba in this case.

More about CFLs in Wikipedia.

Read in your language