Winter is the great season to go out for a hike around Kathmandu valley. One can escape the chaos of the city once in a while when one can enjoy lush jungles, adventurous trails and beautiful view of the Himalayan ranges in the north.
On 11 December 2019, six members from KIAS set for a hike to Champadevi peak at around 8:30 am from Khokana Bus Park which is 4 km south from Ekantakuna, Lalitpur. We were to follow our route from Khokana-Pharping-Bhanjyang to Champadevi and finally to Machhegaun. Khokana is a traditional Newari town of Lalitpur which is known for its mustard oil. On the way, we passed by Shree Rudrayani temple which is said to made by King Amara Malla in the 15thcentury, around which Khokana is believed to come into existence. 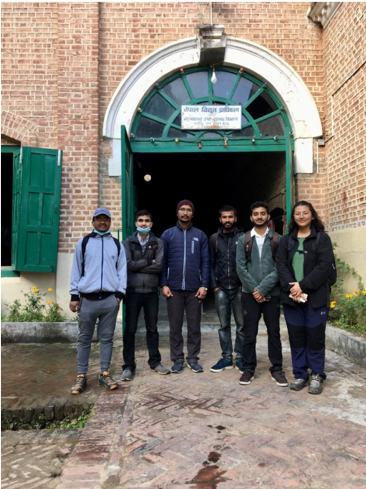 Under the warm early morning sun, we walked through paddy fields where straw was left for drying. Ahead was a suspension bridge and River Bagmati that looked awful and carried foul smell. It is so disheartening to see our river turn into no less than a sewer. Walking alongside Bagmati river corridor, we could see tunnel farming for off-season vegetables and mushrooms being done and also brick kilns. After an hour walk we reached the Pharping Hydropower Station, also known as Chandra Jyoti Hydro-electric Power Station established in 1911 AD. It is the first hydropower project of Nepal and the second oldest in Asia. We went on to have a look inside the station, which surprisingly is still in operation but restricted to few hours a day.

Our team then followed stairs alongside the penstock pipe of the project upwards to the reservoir, which now supplies drinking water for Lalitpur. The climb was not easy at all for me as I finally reached the reservoir panting after 45 minutes. It was nearly 12 noon and we rested for about 20 minutes and bought some oranges from a local vendor and headed to Bhanjyang, a small settlement area on Balkhu- Dakshinkali highway. Almost every household on the way had ripe orange trees. Hog plum ‘Lapsi’ (Choerospondias axillaris) trees were also loaded with fruits.  Hog plum is commonly enjoyed as pickle in Nepal and nearby countries. Shishir, Jhalak and Sachin could pick some plum and shared among us. 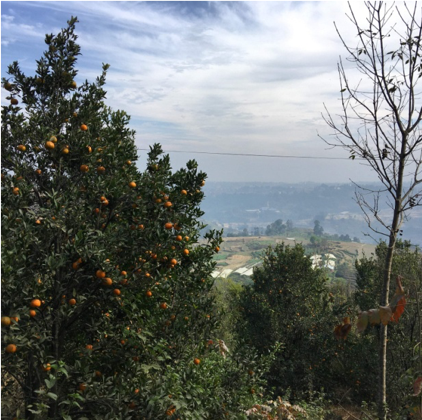 We walked on a vehicle road taking some shortcuts and reached Bhanjyang in 30 minutes. Then we again took a steep path eating oranges along the way through a pinus dominating forest and reached in front of Hattiban Resort on top. We rested there for a while had some light snacks and moved on towards Champadevi. Along the way we could see the entire Kathmandu valley partially engulfed in smog and we admired and tried identifying the majestic Himalayan peaks behind the hills. The team was also very keenly locating places down below that looked tiny from our height and those airplanes landing at the airport. 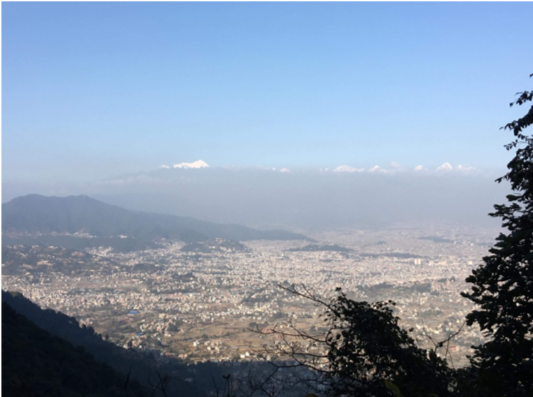 As we were moving towards Champadevi trail, the place was littered everywhere and it was shocking. Champadevi is one of the most visited hiking trails in Kathmandu and that day as well, large number of national and international visitors could be seen along the way. Before starting our climb to Champadevi hill, we had a break and had our home-packed snacks. Then we walked through the dense forest which was dominated by jungle nuts/ katus and other tree species like Chilaune (Schima wallichi), Rhododendron, etc. Again those steep stairs to the Chamapadevi temple were tiring and seemed impossible to me. Shishir accompanied me while other team members waited for us at the top at the temple. After 45 minutes, we finally reached our destination at around 2:30 pm. Phulchowki and Bhasmasur hills could be seen from atop the hill. We planned to trek Bhasmasur peak next time. On our way back, we asked one of the visitors about the way to reach Machhegaun, and he asked to take a right turn from a large garbage pile. It struck me that littering has become so common in this place that a garbage pile can even be used as a waypoint. It can be a very serious issue as wild animals roam round in the forest. We walked down through the slippery and small but very difficult trail. It took us about 1.5 hours to reach Machhegaun, from where we took a bus home. 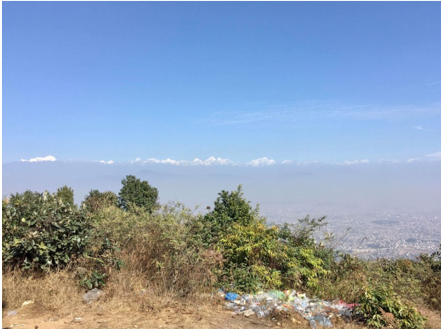 The day turned out to be tiringly-awesome as I had not been for a hike for so long. It is said difficult trails take us to the most beautiful adventures.
at 8:02 PM

Read in your language